How the Evolution of Language and Diet Are Connected

Home » Blog » How the Evolution of Language and Diet Are Connected 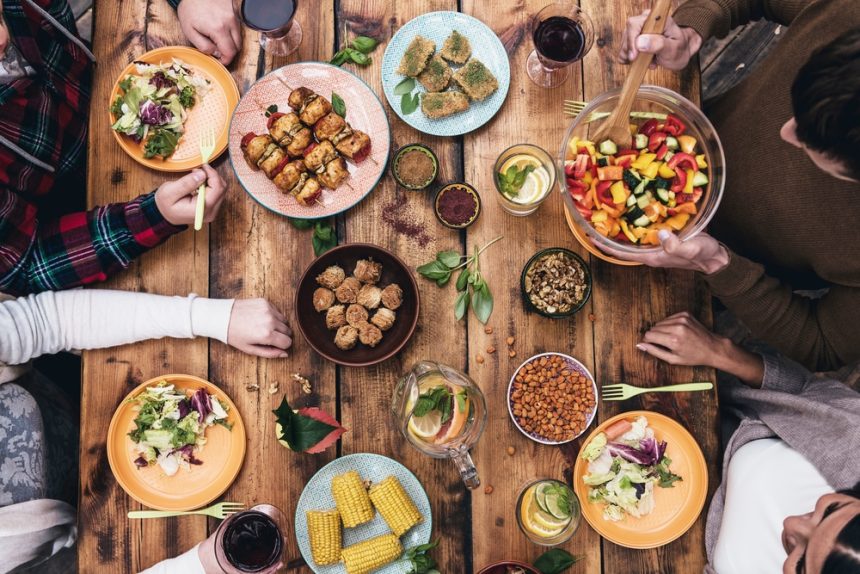 Our ancestors’ change of diet may have initiated the development of language in our species – at least that’s the theory. What anthropologists believe is that at some point in time our ancestors changed what they ate and this may have helped the brain evolve its capabilities, including language abilities.

But this isn’t the only way language and diet are connected. Modern languages may also provide clues to man’s early spread across the continent of Europe.

Anthropologists claim a trade-off occurred between brain and gut size around 1.5 million years ago, with a change in diet as the evolutionary cause. The larger brain size contributed to the development of our language capabilities.

At some point in the past, our early hominid ancestors made a move away from canopied forests to savannah living. This meant exchanging the lower calorie plant-based foods of the forests for one with more calorie-dense ones, including meat. Over time, this meant our bodies had less need to devote resources on digestion and enabled our brains to grow larger.

The expensive tissue hypothesis (ETH) explains why this trade-off between gut and brain may have happened. It takes 20 times more energy from calories to grow and maintain a single gram of brain tissue compared to any digestive organ.

Whilst a bigger brain may have been evolutionarily useful, it wasn’t until our calorie consumption became more efficient that precious energy could be diverted away from digestive functions to serve the brain.

Food and our facial structure

As our brains grew, we were able to make more sophisticated use of tools. Researchers studying the human bite mechanism identified that the use of stone tools to cut meat into pieces may have significantly changed both the human jaw structure and the amount of time dedicated to chewing.

The theory is that once these tools had been developed, there was less chewing required which may have led to evolutionary changes in the human jaw, teeth and mouth. This may also have supported the evolution of speech.

A shorter jaw would have enabled speaking. Although early man is unlikely to have had any taboos about speaking with his mouth full, it’s arguable that spending less time chewing might also have freed-up the mouth for more talking.

Greater reliance on meat will also have incentivised social co-operation. Although Chimpanzees are fairly omnivorous, meat is only a small part of their diet. Food sharing and co-operating to find food is less common than in our species.

Was cooking the catalyst?

Some anthropologists argue that cooking may have been a key catalyst of some of our brain’s evolutionary leaps forward. The argument is that cooking enabled our ancestors to extract energy from food even more efficiently. Converting food into calories more effectively means less energy is required for digestion – and more is available for brain function. There’s evidence (albeit controversial evidence) that humans may have been cooking meat as long as a million years ago.

Whilst some anthropologists argue that the brain was able to develop in size and sophistication because early man added meat to his diet, others argue that it was cooking that made the calorific leap forward. There’s as yet only one archaeological site that supports the theory that cooking may have started this early in our history, which is one of the reasons this theory is so controversial.

Linguistics could provide clues to the adventures of early humans. A branch of linguistics that concerns itself with trying to trace language ancestry is providing archaeological evidence of how man may have travelled across his world. Specifically, in Europe, linguistics is being used to trace where early European man may have lived before branching out across the wider continent and eventually to the British Isles.

Linguists examine modern languages to identify commonalities that point back to a common Stone Age language ancestor. The French and Danish words for fish may have had a common ancestor word in a Stone Age proto-language now largely lost from view.

This language is known to linguists as ‘PIE’ (‘proto-Indo-European’). Root words such as deer, basket, mead, bean, and onion, hint at the vocabulary of PIE’s Stone Age ancestors.

Archaeological evidence helps us understand the historical geographical limits of prey animals such as beaver and squirrel, so by understanding which featured in the PIE language we can perhaps understand which food animals our ancestors encountered.

It’s a bit far-fetched but what seems to support this rough outline of a Stone Age diet is what’s missing as much as what’s present. The absence of more southern European/Mediterranean food such as figs or citrus fruits suggests that the landscape of early European humans may have been restricted to more northerly climes.

There are many flaws to this theory. But archaeology of all kinds is based on best guesses, and it’s another theory contributing to our depiction of early European man.

We now understand that the evolution of our language capabilities may be connected to the diet of our earliest ancestors, but language could also help us understand those ancestors better. Archaeological evidence continues to uncover new finds that help us build a picture of what their lives were like, with new discoveries happening all the time.