The innocent error was a hit on reddit.com, where a confused customer posted his findings. However, Swedish speaking users of the site could easily solve the puzzle. Raps can also be translated into ‘rapeseed’, which is a type of flower.

The 87-year-old founder Ingvar Kamprad did not like the idea of having to remember easy-to-forget product codes and therefore gave each product a tongue-twisting Scandinavian name according to their category. For instance, coffee tables and media storage have Swedish place names, beds and wardrobes Norwegian ones and dining tables and chairs have Finnish place names. Women’s names are used for fabrics and curtains and men’s names represent chairs and desks.

According to the company, a whole team searches for inspiration by going through ‘dictionaries, websites, crossword dictionaries, atlases, announcements in the births column, and place-name lists’. All product names are Scandinavian words which have to be between 4 and 10 letters long. They are usually checked in order to avoid inappropriate or awkward translations in any of the languages spoken in the 40+ countries where IKEA does business.

Nevertheless, the Belfast Telegraph states that some words have slipped through the net and IKEA has had trouble over the meanings of their product names before. The children’s workbench fartfull was amusing for English speakers, whilst the Germans laughed at Gutvik, because it sounds like ‘good f**ck’ when translated into German. The pillow case Skarblad, which is named after a flower, translates into ‘cut blade’ and the traditional Swedish dish Spatula Gubbrora becomes the less appetizing ‘old man touch’.

As stated by the Wall Street Journal, the word Redalen sounds uncomfortably close to getting to third base in Thailand. IKEA had to employ a team of Thai speakers ‘who modified terms so they can’t be so easily misinterpreted’ in Thailand’s cursive, Sanskrit-influenced alphabet. 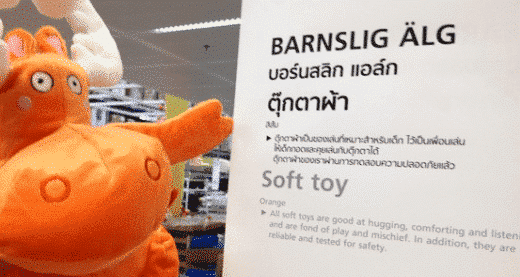 More and more companies face the problem of losing their product names in translation as the whole world becomes a potential market. For example, back in the 1930’s, Coca-Cola had some trouble finding suitable Chinese characters because the original translation meant ‘female horse fastened with wax’.

Your company can avoid making mistakes like this. Contact Toppan Digital Language today and our expert team will help you find a suitable solution for your product names.