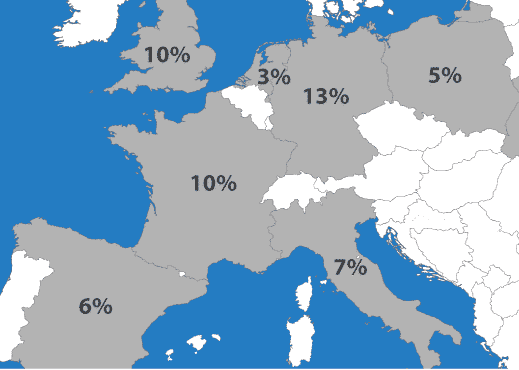 Your international marketing campaign begins with laying your sites on new target markets for your product. If you intend to move your product throughout Europe via ecommerce, key considerations include knowing where the highest internet traffic resides, how much penetration there has been for future market growth, and what search engines, browsers, and social networks are being used.

In the infographic below, we evaluate the top 10 countries that make up 77% of all internet users in Europe, providing details on population, SEO targets, browsers and social media.

Understanding which search engine is popular in a given region is important to driving customers to your site. It will come as no surprise that the search engine Google dominates with a near 90% margin over its competitors across Europe. Google has sustained that advantage consistently since 2008. However, don’t underestimate its competition in the Eastern European markets. In March 2013, Google’s advantage over YANDEX RU is only 11.5%. To put that into perspective for those of you familiar with the extreme commercialization of bing in the States, Google still has a 68% advantage. YANDEX RU and Google have maintained their respective market shares for the past 5 years; not taking YANDEX RU seriously when deploying your SEO program into Eastern Europe would be a costly mistake.

Social networks are an important tool to exploit in any international marketing campaign for the power they can bring to your brand. Facebook reigns throughout Western Europe, and is second to Vkontakte in Eastern Europe. In Russia, both networks were fairly close in popularity from mid-2011 to mid-2012. Since then Vkontakte has taken over with an average of 45% lead over Facebook, and as of March 2013 has been experiencing stiff competition from Odnoklassniki. However, it is important to keep in mind who your target audience is as well as your objectives. If you are trying to grow your SEO, don’t ignore YouTube and Google+. If you are trying to network and sell to businesses, specifically in Western Europe, get on LinkedIn and Twitter. More information is available on multilingual social media in our international guide to social media.

The browser industry is a bit more exciting. Understanding the browser your target market is exploiting is important for the functionality of your website and cloud software. As is the case in many countries across the globe, Chrome, IE, and FireFox are in close competition. IE has taken a hit since 2008, dropping from first place at over 60% to third at only 23%. FireFox has decreased as well, at a much slower rate; they peaked in 2010 at 41% and are now down to 28%. Chrome on the other hand, non-existent just five years ago, is now leading the pack at 37% of the market share across both Western and Eastern Europe.

When taking your product into a new market and selling it online, make sure you partner with a team who understands the nuances of international search engine optimization, transcreation, and social media monitoring.

Embed this infographic on your site

9 Ways Transcreation Can Improve Your SEO

What Is the Hreflang Tag? And Why Is It Important?