How Trump’s Use of Language Is Key to His Success 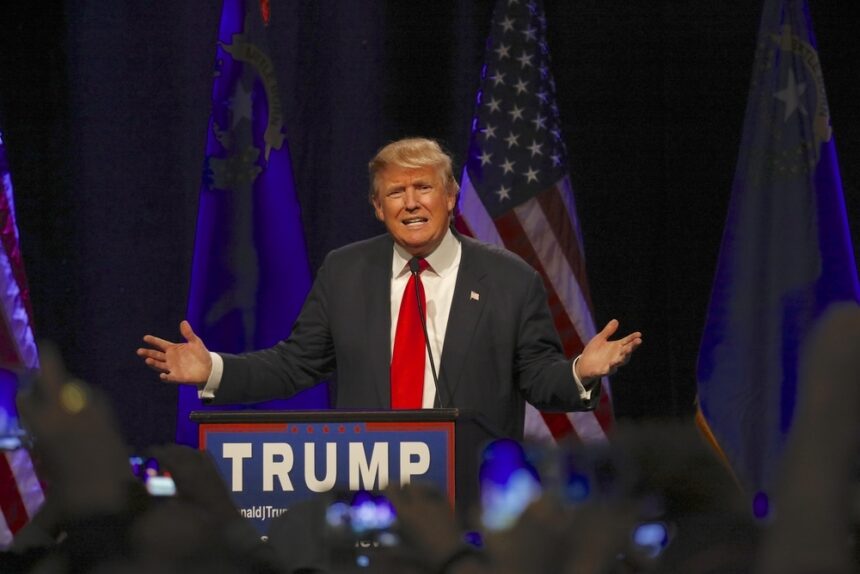 To the horror of many, presidential hopeful Donald Trump looks set to become a contender in the US presidential elections.

Although his candidacy will only be confirmed after the Republican National Convention in July, already it looks as if he may have beaten other candidates to represent his party in the November presidential elections.

His success has been baffling to many. One Kiwi journalist observed “Trump personifies everything the rest of the world despises about America: casual racism, crass materialism, relentless self-aggrandizement, vulgarity on an epic scale.”

Despite the fact that Trump seems to have alienated large demographic chunks of the electorate, including women, Hispanics, and white college graduates, he now seems to be a serious contender for the White House.

It’s a remarkable situation. Trump’s candidacy was initially seen as such a joke that the Huffington Post covered it in their entertainment section.

So why is Trump such a hit with voters? Some curious research seems to indicate that Trump’s language skills may be a major contributing factor to his success.

Shooting from the hip

Trump’s progress in the electoral campaign has been attributed to the fact he isn’t a conventional politician. He comes across as fresh and unscripted, and has a reputation for shooting from the hip.

This reputation is strongly reinforced by his choice of language. Trump certainly isn’t politically correct – previously he’s made comments such as calling Mexicans rapists. It’s an approach that’s alienated large swathes of the electorate and his campaign has been widely criticised.

But his unscripted and unfiltered way of speaking seems to have helped him connect with audiences. Unlike professional politicians, who are strongly aware how their remarks can be taken out of context and later used against them, Trump ignores any danger of his words being used against him later. This makes him appear more truthful – even if what he says is often crass and offensive.

Analysis of the way Trump speaks suggests his language skills are quite infantile, but also indicated that his simple speaking style may be one of the reasons he manages to engage with the electorate.

The structure of Trump’s language is particularly distinctive. Many politicians have triumphed using short, punchy sentences with the most important words at the end. A typical example would be JFK’s “Let us go forth to lead the land we love”.

Trump takes this even further by using exceptionally simple sentence structure to make his points. When responding with passion to a question, his sentences tend to contract in length and many range between only 5 and 15 syllables long. Here’s a typical quote from him, which uses very short and simple sentences and employs lots of repetition to hammer points home.

One analysis of Trump’s speaking manner, by the Boston Globe, concludes he has the speaking ability of a child of around 9 or 10 years old.

The study assessed speeches by 19 presidential candidates using the Flesch-Kincaid readability test, which analyses factors such as word choice and sentence structure to determine what level of education is required to understand the content.

By contrast Hilary Clinton, Trump’s apparent rival for the White House, speaks at a level of a 13-14 year old. Other candidates who have since fallen by the wayside generally speak at the level of slightly older teenagers. This includes Bernie Sanders, who ran a campaign based on critiques of the entire political system and generally spoke at the level of a 16 year old.

Amongst the candidates, Trump’s speeches used the lowest average number of words per sentence, fewer syllables per word, and the lowest number of characters per word.

He also uses simple adjectives such as ‘great’ and ‘terrible’ and uses simple concepts such as ‘make America great again’ rather than embarking on lengthy critiques of the capitalist system, in the manner of Bernie Sanders.

His language tends to be emotional, aggressive and angry. He tends not to embark on long winded analysis of the complexities of foreign policy, which makes his stance hard to criticise. And he’s the master of the pithy putdown: his description of Jeb Bush, an early rival, as ‘low energy’ was deeply damaging to the Bush campaign.

Politicians aren’t necessarily wrong to communicate without elaborate style. Good communication is clear and often simple. Whilst George W Bush was often mocked for his speaking style and unsophisticated approach, he was effective at connecting with the voters.

Analysing one of Trumps’s speech in particular, around the thorny issue of discriminating against people based on their religion, found that 78% of his words contained only one syllable. This takes simple communication to the extreme.

Professional copywriters often have to fight against the urge to overuse independent clauses in their writing.

These complicate spoken or written language, and for a politician they can make the speaker appear less confident, more thoughtful, less convinced by their own words. Trump’s short sentences hammer home points and express complete confidence. Although his campaign may be offending an alarming many both inside and outside the US, it’s one of the reasons voters seem to believe he could be the man for the job.