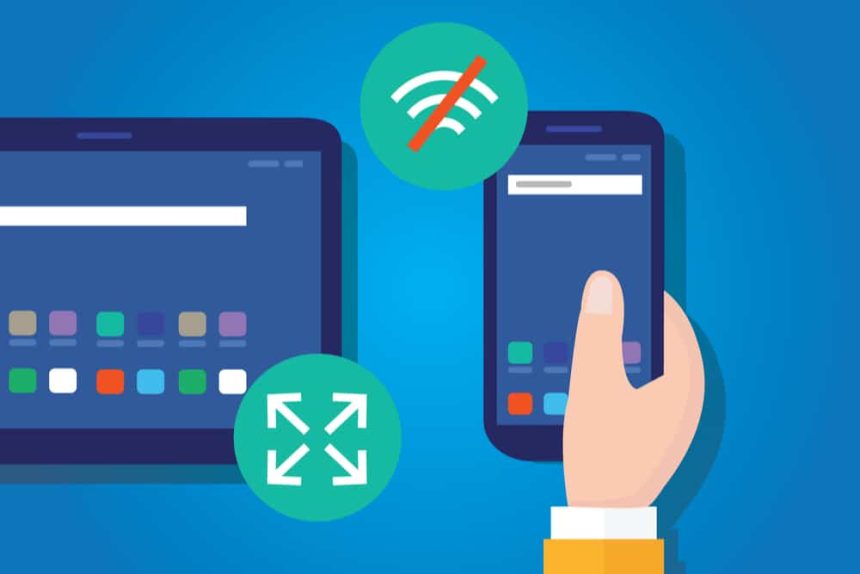 Described as the next big thing in mobile development, Progressive Web Apps (PWA) are really just web pages that pretend to be apps for mobile users. These websites enable an app shell and configuration file to be downloaded to your phone, providing a great user experience even with poor connectivity.

They offer features such as push notifications and geolocation, are speedy to use and a good compromise between the user experience an app can offer and the findability of web pages.

Because they are designed to work reliably across all browsers, they serve all users equally and prevent developers having to make a decision about whether to build first in iOS or on Android.

Apps created using progressive methods tend to be fairly easy to both deploy and maintain. It’s super-easy to update PWAs as you don’t need to go through app store approval processes to push through updates.

Traditional native apps aren’t always easy to find via search, instead, users tend to need to hunt them out in app stores or be directed there from marketing activity. PWAs help overcome this problem simply by being more visible in search.

But that’s not the only reason progressive web apps are popular with brands. They also offer superior user retention. Progressive web apps skip the downloading and installing stages and let the user start using your app right away.

This means the app doesn’t suffer from the user attrition that occurs when users download, install, and open your app before they can even begin to interact with it. Progressive web apps allow users to get started right away with whatever your app has to offer, before being prompted to install the app ‘properly’ for the full experience. Combined with web push notifications, they can help raise engagement.

PWAs can also work reliably even if the network conditions aren’t ideal. They tend to need less data for initial page loads, and less data to carry out transactions, compared to traditional apps. That’s particularly significant in emerging markets, where the cost of data is significant to many web users and saving consumer data can boost user numbers and engagement.

PWAs may be the way for your brand to reach “the next billion”; emerging market consumers likely to have slow connectivity and Android phones.

Progressive web apps work because they favor users and usability. Because they don’t need to be downloaded, there’s no barrier to their use. They tend to work even when users don’t have much data or if connectivity is low – sometimes they’ll even work offline.

They maximize the immersive experience, optimizing engagement and they tend to focus on being quick to load. Features such as push notifications also make it easier to re-engage users, and users can often be persuaded to make the PWA their home screen so it’s even more readily available for re-use.

Choosing a PWA rather than a traditional-style app tends to be better from a search perspective. People don’t spend as much time looking through app stores as they do using search.

Few web journeys start in the app store; 90% are thought to start with search. This behavior really helps maximize the findability of anything that’s highly visible in search. PWAs are certainly a lot easier to link into and promote via search compared with native apps.

Brands wishing to promote their native apps have tended to have to carefully plan their link strategy. If you get your deep-linking wrong, or if you don’t achieve parity between your app and your site content, then search engines tend to penalize you in results.

The risk of falling foul of the search algorithms is a real disincentive to build traditional apps – especially for big brands that struggle to maintain parity between their app and web content. All the more reason to try the PWA approach, as they’re much easier to index.

PWA development is being adopted by major digital players such as Alibaba and Twitter. Google’s leading heavily with PWA development, with services, include weather, restaurants, traffic and sports tools. Aliexpress, Alibaba’s consumer shopping platform, saw a huge increase in iOS conversion rate after building its PWA.

Twitter designed its PWA, Twitter Lite, specifically for emerging market users. It’s been praised for working incredibly well across platforms and Twitter also claims there’s been a 50% increase in tweets since the new platform debuted.

The PWA supports 42 languages including some major Indian languages such as Hindi, Marathi, and Tamil. By making lightweight platforms like this available to 2G customers in populous countries, Twitter has massively expanded its potential user base.

But there’s a downside to all these PWAs. With increasing numbers of websites now building PWA’s, users are being asked to accept push notifications all the time. It’s likely they will rebel against the annoying push notification requests that now seems to dog every site you visit.

Users are going to start blocking these requests in increasing numbers, particularly if they don’t come from sites that offer notifications of real value. Brands should be wary of annoying users like this.